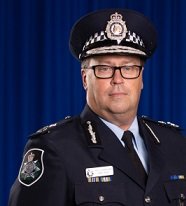 As the Commonwealth TSOC Coordinator, Karl’s role is to lead the national effort to combat the rapidly evolving threat posed by TSOC, including child exploitation, illicit drugs, illicit firearms and money laundering.

Karl has a distinguished career in policing and national security operations, in both the AFP and Victoria Police.

He has served the community for more than 30 years, in Australia and overseas. He was awarded a Medal of the Order of Australia for his contribution to the investigation into the Bali bombings in 2002. In 2004, Karl led an Australian Police Disaster Victim Identification team to Thailand in response to the Indian Ocean Tsunami disaster. He was subsequently elected as Joint Chief of Staff during the crisis, and later awarded a Humanitarian Overseas Service Medal for his contribution to the operation.

Karl specialises in close operational support, organisational reform, and delivery of new capabilities and services. He is a strong champion for innovation, process improvement and change. Karl has a Bachelor of Science from the University of New South Wales and an Advanced Diploma of Forensic Investigation from the Canberra Institute of Technology.