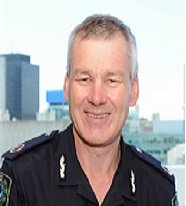 Assistant Commissioner Paul Dickson APM is a career police officer having joined the South Australia Police in 1978 as a 16 year old recruit and graduating in 1980.  In his career he has served in a variety of different locations in regional South Australia and in the metropolitan area.  He has had a diverse range of policing experiences from uniform patrol officer and detective in both regional and metropolitan areas.  In 1990 he was promoted to the rank of Inspector and has worked in a management role at differing levels throughout the organisation in operational, criminal investigation, specialist crime and internal investigations areas.  Today Paul is the Assistant Commissioner for Metropolitan Operations Service.

At the national level Paul has been the chair of the Serious and Organised Crime Coordination Committee.  Paul has also received a number of tertiary qualifications including a Bachelor of Business, Master of Public Policy and Administration and more recently a Master of Studies (Criminology) through the Cambridge University in the United Kingdom, this course of study focused on evidence based policing methodologies.

In his current position Paul has led a number of research projects which have focused on domestic violence and in particular high risk victims and offenders.

Paul has two adult daughters and is also heavily involved in the Scout Association of South Australia for all of his life and is currently the Vice President of Scouts in South Australia.