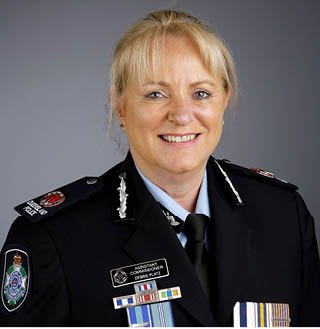 Debbie Platz is the Assistant Commissioner Security & Counter-Terrorism Command (SCTC), Queensland Police Service (QPS). The Command encompasses three groups to best support Queensland’s current and future counter-terrorism needs. The command supports National and State counter-terrorism and security strategies and consists of the Protective Services Group (PSG), the Prepare, Prevent, Protect Group (PPPG) and the Counter–Terrorism Investigation Group (CTIG). The purpose of the Command is to prepare for, prevent and respond to threats of terrorism and other security related matters, along with ensuring safety at State Government facilities. SCTC has approximately 500 members state wide.

In 2017 Debbie joined the Australian Federal Police as Assistant Commissioner Crime Operations which provided a law enforcement investigative response to a diverse range of complex crime types, including sensitive investigations, cybercrime, human trafficking, people smuggling and child protection. During this time, Debbie was responsible for the development and delivery of the Australian Centre to Counter Child Exploitation, bringing together the expertise of Federal, State and Territory police, non-government agencies and private industry in a collaborative national response to counter child exploitation.

In July 2020 Debbie was appointed as head of People and Culture Command, which amongst other things incorporated Taskforce HORIZON. Taskforce HORIZON led the AFP’s major reform and encompassed the re-shaping of the organisation to boost regional commands, as well as non-BAU reforms such as the finalisation of a new rank structure, staff surveys, recruitment of diverse groups, police reserves and much more.

Debbie also performed the role as head of National Support Command. This Command included teams that provided covert, technical, tactical and specialist support to the AFP and State and Territory police partners.
Debbie enjoyed a 30 year career with the QPS, commencing on 27 September 1985. She was heavily involved in the external performance review of QPS, an internal review of Information Communications and Technology and the 2011 Flood Crisis Review Group. Debbie also worked as the Chief of Staff to the Queensland Police Commissioner and was later in charge of the training and development of police, managing two police academies, a leadership centre, recruitment, workplace safety and wellbeing.

In 2019 Debbie was awarded the Queensland and Australian Telstra Businesswomen of the Year award for Public Sector and Academia.