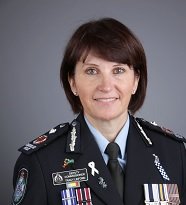 Deputy Commissioner Linford has 37 years policing experience having worked in both the Victorian Police and Queensland Police Services.  During her 31 years in Victoria Police, she worked on a number of state-wide projects that have impacted significantly on the way Victoria Police operates today.  Highlights include – the introduction of a Victoria Police Intelligence Model, and the formation and implementation of the Major Crime Management Model, which was brought about following a series of gangland murders.

The Deputy Commissioner performs key governance roles on Boards and Committees including the QPS Board of Management and the People Committee. She chairs the Senior Women’s Collective and is the Queensland representative on the Australia-New Zealand Counter-Terrorism Committee, Australia and New Zealand Society of Evidence Based Policing, Australian Centre to Counter Child Exploitation, Australian Transnational, Serious and Organised Crime Committee, National Crime Intelligence System Steering Committee and the Major Events Executive Committee. Deputy Commissioner Linford also represents the QPS on several intergovernmental committees.

Deputy Commissioner Linford holds a Bachelor of Business Management Degree and an Executive Masters in Public Administration.  She is a graduate of the Leadership Victoria Program, the international Leadership in Counter Terrorism Program, ANZSOG Executive Fellows Program, and has completed the Australian Institute of Company Directors Course. In 2009 she won an outstanding leadership award from ACWAP for driving cultural change.  She was awarded an APM in the Australia Day Honours in 2014.